Over the weekend, or yesterday, or whatever day it was because of however this whole “timezones” things works out, DC Warner released an SDCC-exclusive trailer for their upcoming Suicide Squad movie for reasons I don’t quite understand.  Like, I can’t expect it to be about making people want to go to ComicCon because, well, people already want to go to ComicCon.  And if it’s about making people want to go see the film, well, I think most people have already made up their mind about that and I thinks those opinions are very polarised and very definitive.

And it strikes me that it can’t be about advertising to a captive audience because, AS FAR AS I CAN TELL, this trailer was a destination in that people went from point A to point B specifically to go see this trailer — and if I know anything about advertising it’s that it simply has no effect on people who already want to buy the thing.

or is it that it has more effect?  i forget.

It must be less effect because how could an ad make someone want to buy something they already want to buy?

I guess that leaves it as a reward.  Something of which I supposed entitled socially-awkward nerdy types need more.  “omg didn’t you see the trailer? why weren’t you in hall h?  oh what?  you live in Germany?  I’m so sorry for your lots.”

Anyway.  Warner Comics screened an exclusive trailer exclusively to some exclusive audiences and one of those guys turned out to be a dirty filthy criminal and filmed the whole thing and put it on the internet!  Sadtrombone.mp3!~~~

“Warner Bros. Pictures and our anti-piracy team have worked tirelessly over the last 48 hours to contain the Suicide Squad footage that was pirated from Hall H on Saturday. We have been unable to achieve that goal. Today we will release the same footage that has been illegally circulating on the web, in the form it was created and high quality with which it was intended to be enjoyed. We regret this decision as it was our intention to keep the footage as a unique experience for the Comic Con crowd, but we cannot continue to allow the film to be represented by the poor quality of the pirated footage stolen from our presentation.”

The above copy is the official statement from The Brothers DC about the whole thing.  To summarise, or paraphrase, or translate, or however you want me to put it:

If you wanted to see this trailer, if you were thankful that this trailer was leaked, if you watched this leaked trailer, you are a filthy criminal.  If you condone the behaviour of the person who leaked it you are, like he is, a filthy criminal.  You have no self-control.  You have no discipline.  You have no self-respect and you have no respect for the great corporate filmmaking entertainment comicbook conglomerate: The Detective Brothers Pictures.  You have damaged the advertising campaign of this film irrevocably and you are, singularly and wholly, individually and as part of a group, part of the root underlying problems plaguing the industry.  You, the consumer, are the worst part of the entertainment for wishing to be entertained and for choosing to circumvent policy/distribution models/broadcast spectra to consume that entertainment.  You are devilish.  You are fiendish.  You are a criminal and you should be published.  You, and YouTube, are ruining films.  You are ruining advertising.  You are ruining the world.  So take this trailer, in its HD glory, and revel in your decadence and your shame.  You sinful, pitiful, disgusting creature. 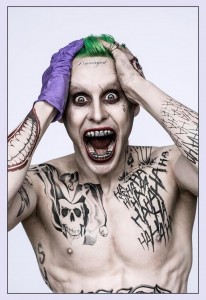 I’m not going to pretend I understand why people are excited about this film.  I don’t get it.  I don’t get the appeal of Batman and I don’t get the appeal of the Joker — especially in the context of Superheroes.  I think DC suffers from systemic storytelling fatigue and I think ultimately the entire Warner Bros group is profoundly embarrassed of their comicbook properties.  I think everyone involved in DC Cinema is trying to recreate Watchmen because I don’t think anyone involved in DC Cinema understands Watchmen. I think everyone at DC Warner Bros. is desperate to recreate what Marvel have made with their movies while wilfully denying what makes those movies successful and engaging and actively trying to make the opposite of what makes those movies successful and engaging because they think those things that make those movies successful and engaging are bad.

and mostly i think anyone who is even remotely excited for any upcoming DC film is actually a moron.

So I don’t get it.  But I do get why people are excited about films.  I understand hype and desire and impatience and I understand why most people are willing to watch crooked shaky grainy 144p YouTube bootlegs of trailers shot on a Motorola Razr.  I get it.

But Warner Bros. sure as Hell fucking doesn’t.

They’ve dismissed their entire audience twice in one incident here.  They’ve dismissed the large sweeping body of the target demographic by choosing to advertise to a geographically privileged few of them in the first place.  Then, after having their hands forced and releasing the trailer to the wider public, they’ve passively-aggressively called out the entire viewing audience for supporting and encouraging piracy.  They even took it as far as to try and make you feel guilty for contributing to the diminishment of an experience had by another group of persons exclusive from you.

It all stems into the same idea that I keep writing about on this blog: digital piracy of entertainment and media, in its current form, exists because audiences adapted to evolving modes of distribution faster than creators and distributors.  The backlash has finally made its way up to the very top of the chain and now the people atop are yanking the chain to trying and dismantle the new models and dislodge the new users.  and its not working and they’re getting really mad.

To me it seems that all they know how to do is attack their audiences and damage their own properties — but then what would I know?  I’m just some young kid in buttfuckoffsville, Australia.

well, i live in melbourne, but you get the idea.